Leeds and Birmingham postpone start of CAZs after software delay 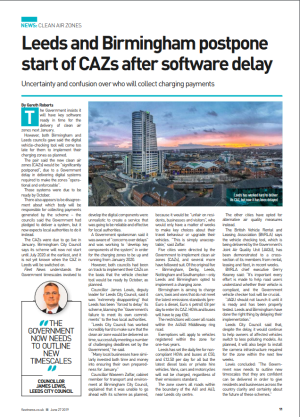 Uncertainty and confusion over who will collect charging payments

The Government insists it will have key software ready in time for the delivery of clean air zones next January.

However, both Birmingham and Leeds councils gave said the digital vehicle-checking tool will come too late for them to implement their charging zones as planned.

The pair said the new clean air zones (CAZs) would be “significantly postponed”, due to a Government delay in delivering digital systems required to make the zones “operational and enforceable”.

Those systems were due to be ready by October.

There also appears to be disagreement about which body will be responsible for collecting payments generated by the scheme – the councils said the Government had pledged to deliver a system, but it now expects local authorities to do it instead.

The CAZs were due to go live in January. Birmingham City Council says its scheme will now not start until July 2020 at the earliest, and it is not yet known when the CAZ in Leeds will be switched on.

Fleet News understands the Government timescales involved to develop the digital components were unrealistic to create a service that was going to be reliable and effective for local authorities.

A Government spokesman said it was aware of “concerns over delays” and was working to “develop key components of the system” in order for the charging zones to be up and running from January 2020.

However, both councils had been on track to implement their CAZs on the basis that the vehicle checker tool would be ready by October, as planned.

Councillor James Lewis, deputy leader for Leeds City Council, said it was “extremely disappointing” that Leeds has been “forced to delay” its scheme, blaming the “Government’s failure to meet its own commitments” to the two local authorities.

“Leeds City Council has worked incredibly hard to make sure that the clean air zone would be delivered on time, successfully meeting a number of challenging deadlines set by the Government,” he said.

“Many local businesses have similarly invested both time and money into ensuring their own preparedness for January.”

Councillor Waseem Zaffar, cabinet member for transport and environment at Birmingham City Council, explained that it was unable to go ahead with its scheme as planned, because it would be “unfair on residents, businesses and visitors”, who would only have a matter of weeks to make key choices about their travel behaviour or upgrade their vehicles. “This is simply unacceptable,” said Zaffar.

Five cities were directed by the Government to implement clean air zones (CAZs), and several more have followed suit.

Of the original five – Birmingham, Derby, Leeds, Nottingham and Southampton – only Leeds and Birmingham opted to implement a charging zone.

Birmingham is aiming to charge cars, taxis and vans that do not meet the latest emissions standards (preEuro 6 diesel, Euro 4 petrol) £8 per day to enter its CAZ. HGVs and buses will have to pay £50.

The restrictions will cover all roads within the A4540 Middleway ring road. Exemptions will apply to vehicles registered within the zone for one-two years.

Leeds has set the daily fee for noncompliant HGVs and buses at £50, and £12.50 per day for all but the latest diesel taxis or private hire vehicles.

Vans, cars and motorcycles will not be charged, regardless of their emissions standard. The zone covers all roads within the boundary of the A61 and A63, near Leeds city centre.

The other cities have opted for alternative air quality measures instead. The British Vehicle Rental and Leasing Association (BVRLA) says the vehicle checking tool, which is being delivered by the Government’s Joint Air Quality Unit (JAQU), has been demonstrated to a crosssection of its members from rental, leasing and fleet, in recent weeks.

BVRLA chief executive Gerry Keaney said: “It’s important every effort is made to help road users understand whether their vehicle is compliant, and the Government vehicle checker tool will be crucial.

“JAQU should not launch it until it is ready and has been properly tested. Leeds and Birmingham have done the right thing by delaying their implementation.”

Leeds City Council said that, despite the delay, it would continue to help owners of affected vehicles switch to less polluting models.

As planned, it will also begin to install the camera infrastructure required for the zone within the next few weeks.

Lewis concluded: “The Government now needs to outline new timescales that they are confident can be delivered in order to give residents and businesses across the country clarity and certainty about the future of these schemes.”