Signs activated by air pollution to go on trial 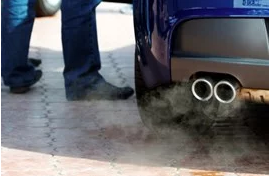 Vehicles will be diverted away from pollution hotspots by signs that react in real-time to increases in harmful emissions.

The technology will be trialled in the Central Bedfordshire Council region thanks to a new network of 24 air pollution sensors.

The network, which has been installed by Westcotec in partnership with Airly, provides open-access, real-time air quality information via an online live map link.

Speaking at the launch of the network at the Move urban mobility exhibition in London, last month, Central Bedfordshire Council senior road safety engineer, Tim Oxley, set out the opportunities now available to reduce exposure to high levels of pollution.

“This project provides a significant step forward in relation to the action we can take when air pollution levels are high,” he said.

“We previously had to wait for data, meaning we were unable to make on-the-spot interventions. Now, by integrating the real-time data with other roadside technology, we can take immediate action that will reduce exposure to high levels of air pollution – steps such as putting traffic diversions in place.”

Oxley believes the real-time sensors provide an “excellent opportunity” to be proactive in dealing with air pollution and to minimise its impact on people.

He says the council has a number of initiatives planned, thanks to the new network, including projects with schools, monitoring pollution from buses and traffic diversions using vehicle-activated signs when air quality levels require.

Westcotec, which specialises in vehicle-activated signs and traffic safety systems, is monitoring the air quality levels and developing future signage to work in conjunction with the air quality reading.

The first sign showing live pollution data was expected revealed at a trade show in Amsterdam planned for April.

Westcotec head of sales and marketing Olly Samways explained: “We have always been interested by pollution rate against traffic flows and speeds.

“As a step on from monitoring, being able to reduce the actual amount of pollutants when a high level is reached was an even larger area of interest. We regularly install over-height and flood monitoring devices that divert vehicles so this would work in a similar way.”

The technology has the potential for local authorities to focus their efforts on those specific areas which require action, rather than the blanket restrictions imposed by clean air zones (CAZs).

Oxley told Fleet News the level of interest from other local authorities in the technology had been “extremely high”.

Central Bedfordshire Council was keen to get involved in the trial after learning Westcotec was looking for a test bed for the technology.

In terms of how the air pollution signs will work, Samways explained that the data can be sourced using the open API.

“When a pre-determined figure is reached, an alert can be sent through the internet to a 4G modem within the sign, which can enable the sign to display such messages as ‘HGV DIVERT AHEAD’ together with directional arrows,” he said.

“We can create diversion signage that will only trigger when pollution levels are high, and which will guide specific categories of vehicle – such as heavy goods vehicles and buses – away from at-risk areas at these times.”

The technology trial in Bedfordshire comes as Coventry City Council announced it would not be introducing a CAZ, after receiving Government support for an alternative emissions reduction plan.

A £1 million scrappage scheme will also be trialled in Coventry next year, with motorists given up to £3,000 worth of mobility credits to ditch their car.

The credits will be provided on a smartphone app through which participants will also be able to plan and book their journeys.

Later in the year, Transport for West Midlands (TfWM) will invite people, who are willing to give up their cars, to apply for the two-year pilot project.

TfWM, part of the West Midlands Combined Authority (WMCA), is working up the detail of the scheme ahead of its launch.

The trial is funded from the £22m Future Mobility Zone grant to the region by the Department for Transport (DfT) to develop and test new transport technology and schemes.